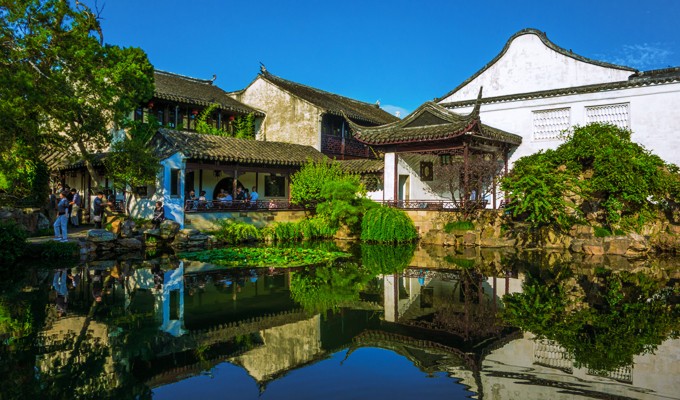 Suzhou, a modern and energetic city with its 2,500-year-old history since He Lv, the King of Wu State, established the city in 514 BC. It is still on its original location during the Spring and Autumn Period. Suzhou has always been known as China's "Paradise on Earth” and can rightly be regarded as one of the most vibrant cities in the Yangtze River Delta economic zone. It has a population of more than 6 million and a GDP of 1.9 trillion RMB (as of 2019) - ranked 6th among all Chinese cities. with a 30-minute train away from Shanghai, Suzhou is an international high-tech manufacturing hub and the world's largest laptop producer.

Suzhou has been named one of China's most livable cities.The Grand Canal, stone bridges, pagodas, and meticulously designed gardens make the city one of the top tourist attractions in China and an awarded “International Garden City”. In 1997 and 2000, nine classical gardens of Suzhou and the Suzhou Section of the Grand Canal are listed in the Catalogue of World Cultural Heritage by UNESCO. Six projects including Chinese Kunqu Opera and Chinese Guqin Art are listed in the Representative List of the Intangible Cultural Heritage of Humanity of the UN.

Weather: Suzhou is located in a subtropical monsoon climate zone, so the weather is mild and moist with four distinct seasons. The coldest month falls on January, and the average temperature is 1°C ~ 8°C (34°F ~ 46°F). Just time for summer, weather in July is sweltering. The average high temperature in this month reaches up to 32°C (90°F)), and the average low temperature dips down to 25°C (77°F).

Favorable geographical Location: Suzhou, alternately romanized as Soochow, is a major city located in southeastern Jiangsu Province of East China, about 100 km northwest of Shanghai. Within Suzhou is Suzhou Industrial Park, one of the most competitive development zones in China. This area also contains the Suzhou Dushu Lake Science and Education Innovation District (home to USTC Suzhou Institute), which sits beside Dushu Lake, one of two lakes in SIP.

Suzhou Industrial Park (SIP), China's equivalent of Silicon Valley, is a global innovation hub with a cluster of Fortune 500 companies, international enterprises and R&D centers. It is not only facilitating and energizing China;s economic development but also providing numerous internship and job opportunities for international students from all over the world.

There are 500 new research and development institutions.

These centers related to artificial intelligence were established by companies like Baidu, Huawei, DiDi, iFlytek, Apple, Microsoft, and SIEMENS, etc.

High-tech giants offer hundreds of jobs and a promising career for foreigners in Suzhou.

Such as AliBaba, Huawei, Baidu, Sina.

There are various restaurants around the campus, from low-to-medium budget dining options including McDonald, KFC, Subway, and many Asian fast-food restaurants, to decent French restaurants, cafeterias, teahouses, pizzerias where you can have a leisure time once in a while. Vegetarian restaurants and Muslim restaurants can be easily found in Suzhou. The university's canteen also serves Halal food.

Suzhou has a long history of its distinct local cuisine-Huaiyang cuisine, one of the eight major cuisine styles in China, featuring the hairy crab and the 'squirrel' fish. Huaiyang cuisine tastes pretty sour and sweet, which caters for the majority of foreigners' tastes.

China as a whole is one of the safest countries in the world to live, work and study. Suzhou locals are rather more open and more friendly to foreigners from all over the world thanks to its high internalization. Therefore, Having a drink with friends at night is more than an enjoyable thing after a day of working.

Suzhou has a host of pubs and bars. In Suzhou Industrial Park, Li Gong Di '1912' area locates several bars including the Ollie's, Jenny's and Goodfellas, which all feature daily happy hour deals and live music. The Blue Marlin nearby is also very popular. Shiquan Jie Bar Street in downtown is another popular spot where you can find the Bookworm, Drunken Clam, and Jane's bar.

For those who want an authentic Chinese club, you won't miss the Inpub, Phebe and Pandora located in the old Suzhou area. In Suzhou Industrial Park, Li Gong Di becomes especially lively at the weekends thanks to nightclubs such as Pravda, which attracts a large number of international and Chinese party-fans.

If you want to be more integrated with Chinese students' community, Karaoke TV (KTV), one of the most popular activities among Chinese students would be the best choice, KTV venues are everywhere in Suzhou and you can have a lot of fun there singing, dancing, socializing and even watching movies. 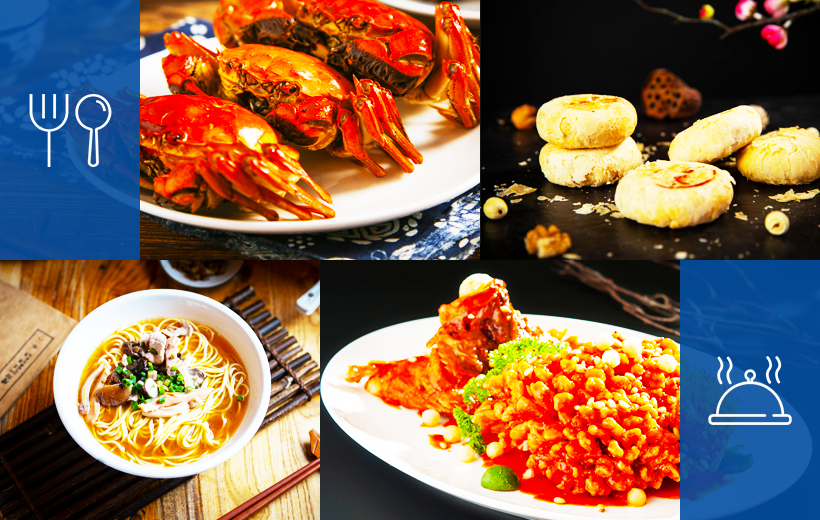 All residence buildings are within walking distance from campus. You can get to lectures, visit the library and spend time on campus easily.

We guarantee all students' accommodation near to our beautiful campus, and there're 5 residence buildings are at your choice.

You will receive the information about your accommodation options once you have received your unconditional offer, and will assist in booking accommodation once you have paid your deposit to secure your place at USTC. If possible, we will try to allocate you to your first choices. However, due to residential resources limitation, we may not be able to satisfy your first choice. 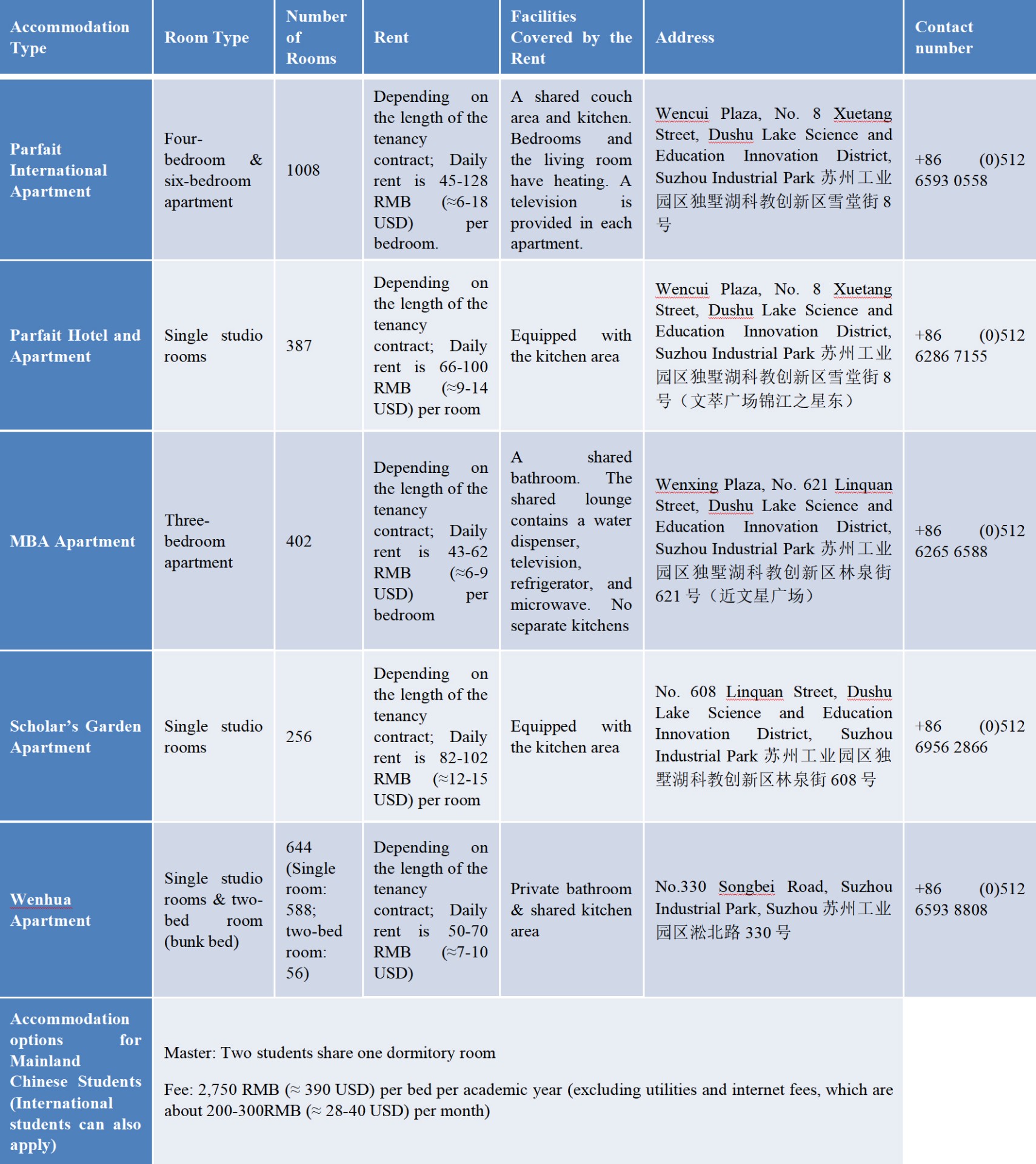 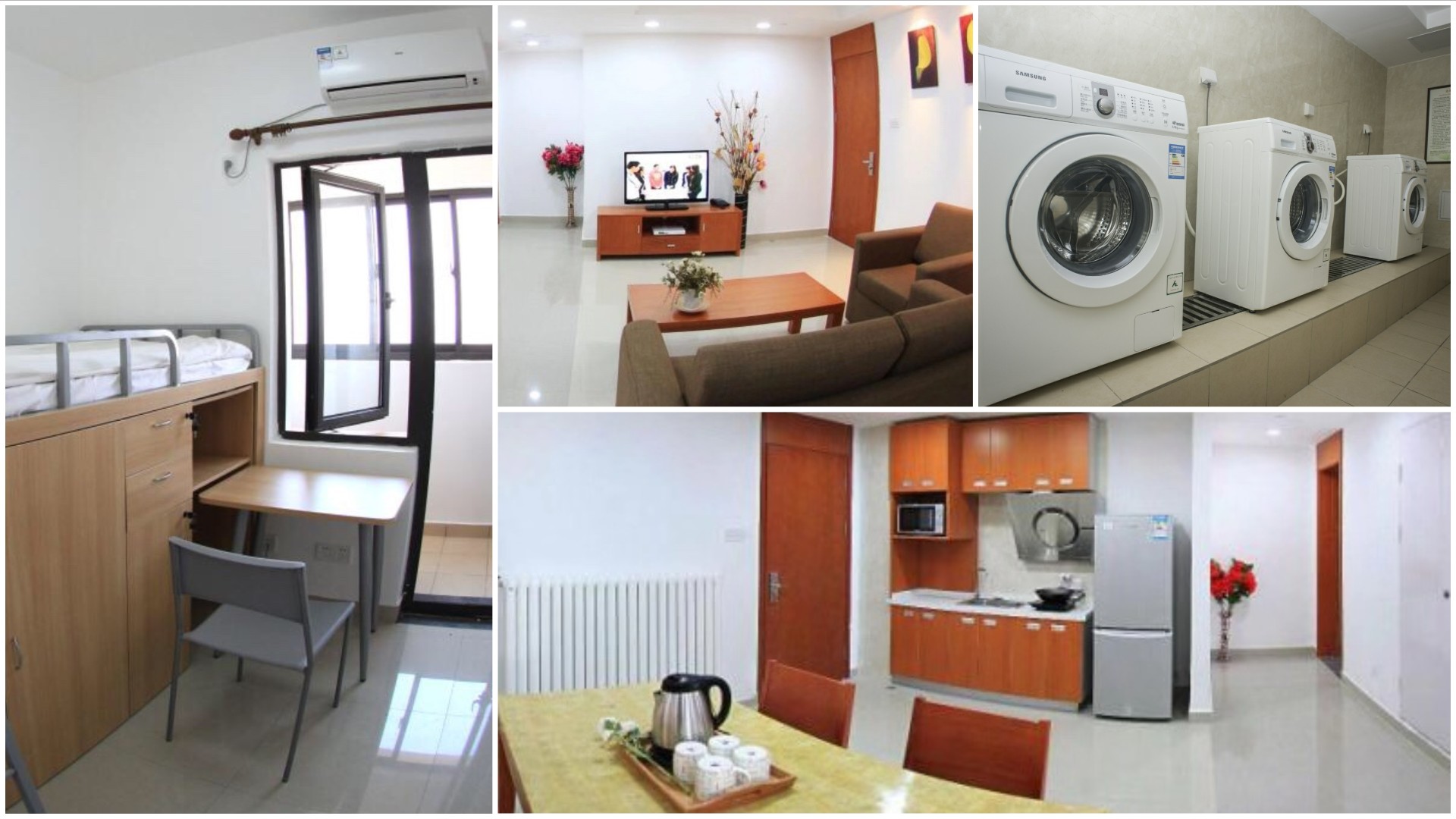 Suzhou has very convenient modern transportation facilities, and getting around is easy by taking bus, taxi, bicycle, and metro.

Buses run frequently from 6am to 10pm and is the cheapest public transport. Fares can be paid in cash, or a bus card, which can be pre-paid in almost all bus stations. Almost all major sites and the downtown commercial centers can be reached by buses running from around the campus.

Taxis are often available on the street or you can order it on Didi (Chinese Uber). Fares are reasonable; the first 3 kilometers cost 10 RMB and 1.8 RMB per kilometer after.

Suzhou Industrial Park has its own public bike system, with over 70 stations connecting the entire area. Upon a one-off purchase of a bike rental card, you can rent any of the 2,000 green bikes for free for up to one hour (1 RMB hour after) and return to any station after use.

The Suzhou Metro is a popular and cheap means of travelling around the city. Starting from the campus, the metro can take you to many places in the Industrial Park and more distant destinations such as Mudu ancient town and the scenic Taihu Lake.

Suzhou doesn't have an airport, so most tourists travel via Shanghai Hongqiao International Airport (SHA). Hongqiao Airport is 86 km (53 miles) from central Suzhou. Terminal 2 is connected to Hongqiao High-speed Train Station (15 minutes’ walk). You can get to the Hongqiao Station from Suzhou's two high-speed train stations in 30 minutes.

To make visiting even more convenient, the whole Jiangsu/Zhejiang/Shanghai area is now 6-day visa free for citizens from 51 countries.

Su embroidery(su xiu 苏绣) is the most celebrated of the four main styles of Chinese silk embroidery, hailing from Suzhou and surrounding towns of Jiangsu province. Renowned for its subtle and refined needlework, Su embroidery is praised for its use of the finest threads, balanced compositions, dense stitching and smooth finish.

Suzhou Pingtan (苏州评弹) is a truly fascinating form of art that uses various ancient instruments and voices to narrate or perform a story. It can be performed as a solo, duet, or trio with the accompaniment of a few different instruments, such as the Ban, or wooden clappers, that produces tones and melody.

Kunqu Opera, originated from Kunshan, is an old drama style listed as a “Masterpiece of the Oral and Intangible Heritage of Humanity” by the UNESCO in 2001. Kunqu dates back from the late Yuan Dynasty (middle period of 14th century), and is reputed as the “ancestor of Chinese dramas” and the “mother of Chinese operas”. Kunqu Opera as a Suzhou-born drama art is typically of rich Suzhou cultural features, but as its wide spread through the main part of China, it combines the characteristics of other famous Chinese operas. To provide the best stage effect and artistic beauty, Kunqu Opera is especially excellent with the fine makeup, soft and graceful singing, elegant actions, and traditional music.

The modern Suzhou Museum is home to a dazzling array of artifacts from Suzhou’s millennia of settlement. Built in 2006, the museum was designed by U.S.-based, Japan-born architect I.M. Pei. Its black-trimmed white exterior is an ultra-modern interpretation of traditional Suzhou houses — the museum's design is quickly becoming an architectural icon.

The museum owns more than 15,000 objects. All aspects of Suzhou culture are represented here. You'll see everything from truly ancient unearthed relics to classic Chinese arts (paintings, calligraphy, porcelain, and carved gems). You can also enter the reconstructions of ancient Chinese homes.

The museum owns more than 15,000 objects. All aspects of Suzhou culture are represented here. You'll see everything from truly ancient unearthed relics to classic Chinese arts (paintings, calligraphy, porcelain, and carved gems). You can also enter the reconstructions of ancient Chinese homes. 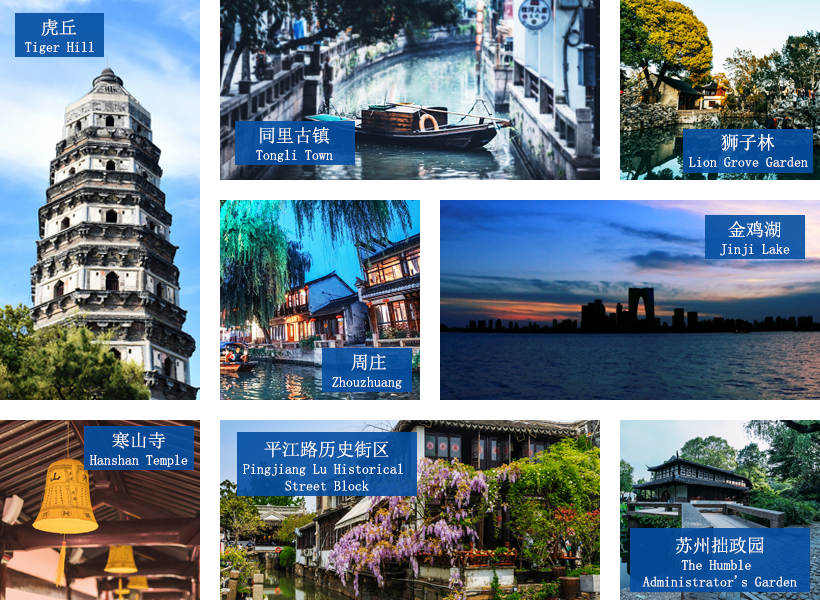 In the old downtown, you can find many shopping streets, such as the Guanqian Street, a 100 years old shopping street since Qing Dynasty; Shiquan Street, home to many hotels and well known for its art and craft products like chinaware, silk, inscriptions, jade, rosewood, etc.; and Shilu (Stone Road) Shopping Street, a leisure area with cafes and pubs to accommodate shoppers, famous for its night market where the shops are open till 10 PM. Apart from the traditional shopping street, there are also numerous modern shopping malls, including Suzhou Center , on the western shore of Jinji Lake, which is the biggest shopping mall in Suzhou, and Eslite Bookstore, Suzhou Village Outlets, Wanda CBD, to name just a few. 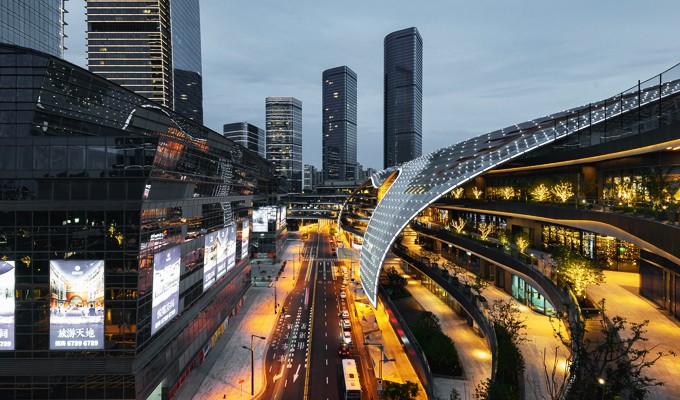 As for the amusement parks in Suzhou, Suzhou Amusement Park and Li Gong Di – Modern Leisure Life Palace are worth to be mentioned.

Li Gong Di is the only causeway on the Jinji Lake of Suzhou Industrial Park. It is a water-side leisure area that represents the modern style of Suzhou. Fancy Euro-style night clubs and spas can be found around this area and can provide you with a luxurious evening. Walking along the Li Gong Di, you can also enjoy a graceful view of the Jinji Lake. 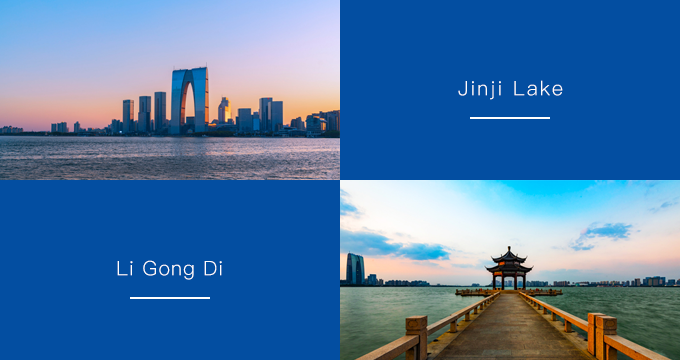