News Details
Notice of 2022 My Story of Chinese Hanzi international competition
Time：2022-07-26，PM 03:22
University of Science and Technology of China

The 2022 “My Story of Chinese Hanzi” international competition, hosted by the Chinese People’s Association for Friendship with Foreign Countries (CPAFFC) and organized by People’s Daily Online, has kicked off around the globe.

The theme of this year’s “My Story of Chinese Hanzi” international competition is “Yi” (义), an ancient Chinese philosophical concept that stands for kindheartedness and justice in Confucianism and morality and righteousness in Mohism. Confucius, the greatest educator of ancient China, a major thinker as well as the founder of Confucianism, once said that “One who does nothing when encountering injustice is a coward”; and Mencius, another ancient Chinese philosopher in the Confucian school of thought, believed that “A sense of shame is the beginning of righteousness.”

The international competition consists of preliminary rounds, semi-finals, and finals. The first two rounds of the competition will be held online. Contestants will answer questions and provide a one-minute self-introduction video in the preliminary rounds. Second-round contestants will then take part in the round via video link and speak off the cuff. After a tally of votes cast by experts and judges, the top 10 selected winners will move onto the finals, which are slated to be held offline in mid-to-late September.

Each finalist will deliver a seven-minute speech focusing on the theme of “Yi” in Chinese, with various awards expected to be decided based on the scores and comments provided by the judges.

- International students in China, including ethnic Chinese foreigners who are at least third-generation immigrants;

- Other non-native speakers of Chinese who are non-Chinese citizens.

There is no age limit for contestants.

Note: Finalists who made it to the last round in the 2021 “My Story of Chinese Hanzi” international competition will be ineligible to move on to the semi-finals and finals for this year’s competition.

2.      Online semi-finals – semifinalists will be divided into groups to make impromptu speeches via video link in August. Ten winners will be selected to take part in the final round based on the scores provided by experts and judges.

3.      Offline finals – the finalists will deliver a seven-minute speech focusing on the theme of “Yi” in Chinese in mid-to-late September. Judges will score each of the speeches and select the ultimate champion as well as recipients for various awards according to the contestants’ Chinese language speaking abilities, expressiveness, the core message behind their stories, and how their stories can promote exchanges between different civilizations.

1.      Contestants need to answer five questions within 10 minutes via a WeChat mini program during the preliminary rounds.

2.      After answering the questions, contestants should write out their favorite Chinese character according to the instructions provided.

3.      Contestants must send a one-minute self-introduction video along with an image of the poster showing the contestant’s hand-written Chinese character (which the contestant can save after submitting their answers on WeChat) via email to hanzi@people.cn and cc to iso@ustc.edu.cn by no later than 12 midnight (China Standard Time) on Aug 5. The title of your email must use the following format: “your full name + your mobile phone number” (Note: the name and phone number should match those used when answering the questions).

4.      Video file requirements: MP4, 1080P, landscape format. The video should not be longer than one minute in length. You can share any personal connections and stories between you and Chinese Hanzi in your video).

The top 30 contestants will advance to the semi-finals according to the combined scores they receive in the preliminary rounds.

Scan the QR code below to begin answering the questions: 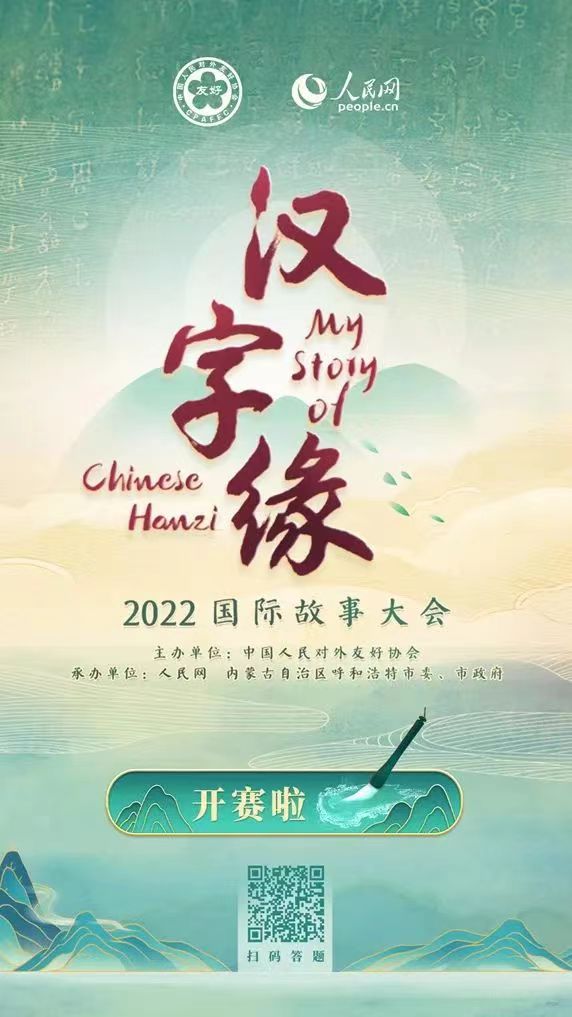